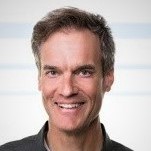 Daniel van der Weide is a pioneer in terahertz generation and detection using integrated circuits, having designed, fabricated and measured the shortest pulses on record using these circuits in 1994, with comparable results at world-record slew rates reported in 2018. Through these and related efforts, Professor van der Weide has made extraordinary contributions to the
understanding of terahertz electronics, including coherent measurements, ultrabroadband antennas, and remote sensing. With his post-doctoral collaborator Fritz Keilmann, he generalized the short-pulse methods he developed, applying them to femtosecond lasers to produce broad infrared combs, whose development has had worldwide impact. Working with Robert Blick, he applied coherent electronic techniques to spectroscopy of low-dimensional electronic systems. In this context, he also sought to localize terahertz radiation to sub-micrometer dimensions using micromachined scanning probes as near-field antennas,with significant ramifications into microwave microscopy.This ability to localize high-frequency energy led him to explore its use in a wide range of applications, including the first non-contact measurements of pore-forming protein dynamics in membranes(also with Blick) and determination of DNA hybridization through microwave impedance spectroscopy with Bob Hamers. With this biomedical orientation in his research, he collaborated broadly with both researchers and clinicians, and supervised several Ph.D.theses in the application of microwave technology to measuring biomolecular signals, such as protein conformational changes.These small-signal measurements gave way to exploration of localized microwave power to treat cancer. Challenged by Dr. Fred T. Lee Jr. to develop a superior treatment modality to radio-frequency ablation, Dan invented a triaxial antenna that could be impedance-matched to diseased tissue in order to efficiently deliver ablative power in a 17-gauge format that enabled percutaneous application under image guidance. With their advisees Christopher Brace and Paul Laeseke, Dan and Fred pursued the clinical refinement of this application of 2.45 GHz microwave power, ultimately establishing Neuwave Medical Inc., which has treated thousands of patients with kidney, lung and liver lesions, and was acquired by Johnson & Johnson in 2016.