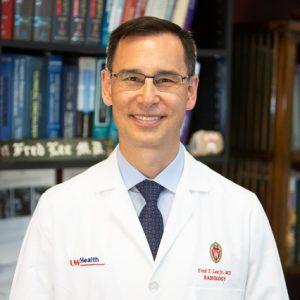 Fred T. Lee Jr, MD is a professor of Radiology, Biomedical Engineering, and Urology, The Robert A. Turrel Professor of Imaging Science, and the Chief of Abdominal Intervention at the University of Wisconsin.

While completing the requirements for the RSNA Scholars program, Dr. Lee developed an interest in minimally invasive tumor ablation therapy, leading him to establish the Tumor Ablation Laboratory at the University of Wisconsin in 1995, one of the first of its type in the world. His work has resulted in over 200 scientific publications, hundreds of scientific and business presentations, 20 book chapters, 24 inventions/patents, and substantial federal and industrial grant support. He is the recipient of more than 50 major honors and awards including multiple “Best Doctor” awards, the UW Health Presidential Physician Leadership Award, and the Grand Prize in the 2014 Wisconsin Governor’s Business Plan Competition.

Dr. Lee is a founding member of the International Working Group on Tumor Ablation, and a founder of three venture-backed biotech start-up companies devoted to cancer treatment: Cellectar, Inc. (Madison, WI), NeuWave Medical Inc. (Madison, WI a member of the Ethicon and Johnson & Johnson family of companies), and Elucent Medical, Inc. (Minneapolis, MN). NeuWave Medical was sold to Ethicon (Johnson & Johnson) in May 2016, and Dr. Lee remains as a consultant. Dr. Lee currently serves on the board of directors and as Senior Medical Advisor for Histosonics, Inc., a University of Michigan startup company developing a non-invasive, non-thermal focused ultrasound technology for tissue destruction.