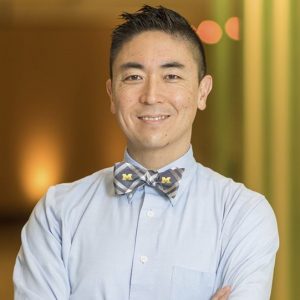 Dr. Clifford S. Cho is the C. Gardner Child Professor of Surgery in the Division of Hepatopancreatobiliary and Advanced Gastrointestinal Surgery at Michigan Medicine.Dr. Cho is an Honors graduate of Brown University and AOA graduate of the Vanderbilt University School of Medicine. He completed his general surgery residency and transplantation immunology postdoctoral research fellowship at the University of Wisconsin, where he served as Chief Administrative Resident. He completed his surgical oncology fellowship at the Memorial Sloan-Kettering Cancer Center, where he served as Chief Administrative Fellow. He joined the faculty of the University of Wisconsin School of Medicine and Public Health in 2006, where he was promoted to Associate Professor with Tenure and named the Ronald and Patricia Kissinger Professor of Surgical Oncology. He served as Chief of the Division of Surgical Oncology, Associate Residency Program Director, and co-Director of the Gastrointestinal Disease Oriented Team in the University of Wisconsin Carbone Cancer Center before moving to the University of Michigan in 2016.Dr. Cho’s academic focus is on hepatopancreatobiliary and gastrointestinal malignancies, cancer immunology, and the mentorship of clinical and research trainees. He has lectured on these academic interests in over 15 national and international visiting professorships, and was named the James IV Traveler in 2014. He has published over 120peer-reviewed manuscripts and book chapters and currently serves on the editorial boards of Surgery and the Journal of Gastrointestinal Surgery. He is the Principal Investigator of a VA Merit Review-funded cancer immunology laboratory that is working to understand cancer-induced T cell suppression, and to identify novel T cell-based strategies for cancer immunotherapy. His laboratory has been continuously funded since 2006 by extramural support from the Veteran’s Administration, National Institutes of Health, American College of Surgeons, and Central Surgical Association, and is a member of the VA Oncology Merit Review study section. He has held a number of national academic leadership positions and is a member of over 15 surgical societies, including the American Surgical Association, Society of Clinical Surgery, Society of University Surgeons, and Surgical Biology Club II.